A GLIMPSE OF GRESLEY

Searching through a pile of paperwork, some of which dates back to the Overhaul at Crewe Works in 1966, I came across what I can only describe as a Calculation Sketch Drawing. It is entitled Stresses on Outside Connecting Rod for A4 Class Engine at Speed of 125 m.p.h., it has an L.N.E.R. Title Block, is undated, and has a number 38-62. Which I presume relates to the year 1938 and is the 62nd such drawing produced in that year or series. One can only wonder exactly when was this drawing was produced and come to the conclusion that someone was a little bit concerned (after the event) as to how near they were to a disaster, in view of the collapse of the Middle Big End on the record run. How we came by this Drawing I do not know, I have had to redraw it to make it fit the Magazine pages. 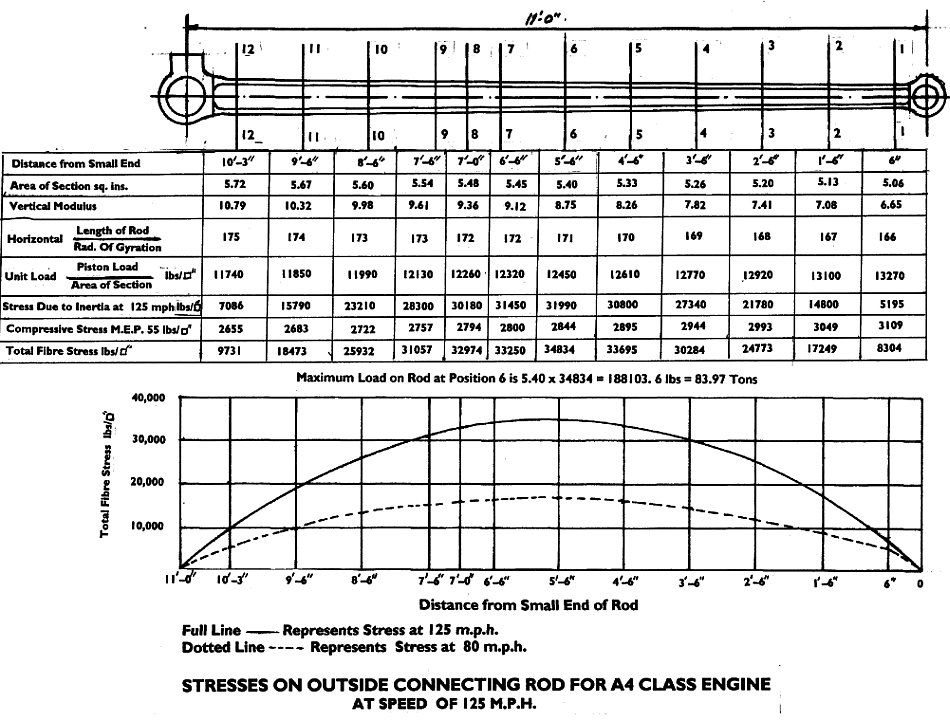 On my first Tour to China in May 1987, the Group visited the Sujiatun Railway Museum situated in the Southern Suburbs of Shenyang. The

Museum was located, in the open, on two sidings, adjacent to the Sujiatun Motive Power Depot. I am not sure of the exact date on which the Museum opened, but I think it must have been at least 5 years prior to this visit, as some of the exhibits had been supplemented by a profuse display of weeds and in one case by a young sapling growing out between the frames.

Class JF2 Nº2525 drew my attention, as exposed on the front running plate was a sturdy, and very basic example of Gresley's Conjugated Motion. The parts of course had to be opposite hand to the English version, the original batch of 5 locos in this class were built by Alco in 1924 (The difference only to be expected, from a nation that drives on the wrong side of the road).

The History of the Chinese JF Class is too complicated to tell here, suffice it to say that there were some twenty odd subdivisions of the Class, covering some 2,500 Engines.

All the JF Class Engines, with the exception of the JF2s were Two Cylinder 2-8-2s, and operated mainly in Japanese occupied North East China. Alco had supplied some "standard" JF class Engines in 1919 to the Puppet Manchurian Railway Administration. One can only assume that a more powerful Engine was required to operate on some of the more arduous routes, and so Alco delivered Five Three Cylinder Class JF2 Engines in 1924. Like their Two Cylinder predecessors the Japanese expanded the Class, with KSK, and Kawasaki building a further 22 Engines between them. There is a suggestion in a Chinese Publication that a further 41 Engines were built, but I cannot find any evidence to back up this claim.

Returning to China in autumn 2004 I was pleased to find that a new purpose built Railway Museum had opened in Shenyang. All the dilapidated Locos from the old open-air site, plus some new ones have been cosmetically restored and are now displayed in the new building. So Nº2525 (A Kawasaki product, not Alco) and its conjugated motion now resides alongside another Blue Streamliner Class SL7 Pacific Nº751.

The discovery of this "foreign" use of the Conjugated Valve Gear led me to look for other uses of the Gear by other overseas railways. These will be the subject of future Glimpses of Gresley.

Looking further into the Alco connection, it appears that 5 three cylinder Pacific locos with ALCO (Gresley) conjugated valve gear, were supplied to the Japanese National Railway (I believe Class C52, the book I used as reference was in Japanese script, so I could be wrong) about 1925. The Japanese copied, and 'improved' the design and these engines were designated Class C53, and they were used on all the crack express trains. About 1934 some of the Class C53s were 'streamlined' it may have been effective aerodynamically, but was visually ugly to say the least. This is no doubt due to converting an existing loco as opposed to building new. The SL 7 mentioned above is of Japanese origin, and is visually acceptable and was built about the same time as the Class C53 was being converted.

In order to make sure that I was not setting off on a wild goose chase, I asked Peter Townend if he could give me any information about the use of the Gresley Gear outside the British Isles. The answer was yes, but he would prefer to write an article detailing the development of three cylinder propulsion, and the various way in which the valve gears were adapted to suit this cylinder layout. Peter kindly agreed to the article being published in Chime and it was published in two parts, starting in the Spring 2006 edition.

Whist writing this piece I heard rumours that the New Shenyang Railway Museum had closed, on checking with my Chinese contacts, they confirmed it was true, and that the building had been demolished. They were unable to tell me what had happened to the loco collection, it seemed that the Government edict to eliminate all steam engines by the end of 2005 included the "stuffed and mounted" exhibits as well. Happily a short while ago I received a letter from China informing me that the locos were safe and were to be housed in a new building in a Pleasure Park near the centre of Shenyang.

Please note that Melvin's articles are his own copyright work and should not be reproduced without prior consultation with the author.