This article is taken from a speech by Sir Nigel Gresley's grandson, Tim Godfrey, at the ceremony for the unveiling of a Derbyshire County Council blue plaque on the wall of The Old Rectory where Sir Nigel grew up with his parents, Rev. Nigel Gresley and Joanna Beatrice Gresley, who are buried with another ten Gresleys in the burial ground near the Village Hall. There are a further four Gresley graves at the back of the church. 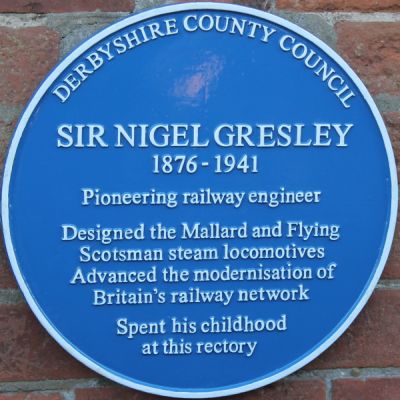 The four earliest children of Rev. Nigel and Joanna Gresley were all born at Netherseal and had arrived at intervals of a year or two as was frequently the case in those Victorian days. Joanna no doubt expected to have other children after Nigel Bowyer who was born in 1870. However, difficulties may have ensued as her fifth child was not born until six years later - and not in Netherseal but in Edinburgh. Tim Godfrey's mother's memoirs state that her father was a sixth child, so Joanna may have had a miscarriage or there may have been an infant that did not survive. In either case, it would not have been named or shown in the baptismal records of St Peter's church. His mother was not in good health and she went to Edinburgh to see an eminent woman specialist and stayed with her until the birth under her care. She nearly died giving birth and the doctors fought successfully to save her life, almost forgetting the tiny premature baby lying at the end of the bed. Happily, he survived and flourished, and grew up to be a strong child.

His first experience of train travel was when he was only a few days old, back home to Netherseal in Derbyshire. Maybe that was when he started his love of railways! At the age of four he said that his ambition was to be an engine driver and work on the railways. Therefore, he was one of those fortunate people whose life's work was his greatest interest. This must have given him countless hours of pleasure.

He was named Herbert Nigel, the first name after Sir Herbert Oakley who wrote some of our hymns. He was Nigel's Godfather. The second name was a family name and all the Gresley sons seemed to be called Nigel as one of their names. He was always referred to as our "Master Herbert" until one day, a family friend looked into the nursery and asked what he was called and back came the reply, "I am Tiny Tim!" From then on, family and friends knew him as "Tim". It appealed to his sense of humour where, many years later, acquaintances wanting to claim great friendship with the famous man were heard to say "Oh, Nigel's a great chap" or "Nigel and I have been friends for years" - which only proved how little they knew him!

Nigel's prep school was Barham House in St Leonards and in September 1890 he went on to Marlborough College. In his last term he won the Science prize, having earlier distinguished himself in chemistry and German. He left in July 1893, he was 17, preparing to take up a practical training rather than stay in the sixth form and go up to university.

His decision to pursue a career in engineering was possibly encouraged by his science-minded father, but it was undoubtedly fostered at Marlborough where he has a permanent memorial in the College Chapel. He became an apprentice under Francis Webb at Crewe and was subsequently taken on at Horwich as a pupil by John Aspinall, chief mechanical engineer of the Lancashire and Yorkshire Railway (who in 1899 was promoted to be General Manager).

Within seven years, Nigel Gresley became Carriage and Wagon Superintendent of Great Northern Railway rising from pupil to assistant Chief Officer. Mr Gresley's rapid progress up the ladder of success was doubtless due to his gift of leadership being compatible with his engineering skills.

His predecessor, Frank Howlden, had enjoyed a distinguished career on the GNR, occupying the position since January 1877, when his successor was only a 7-month-old baby in the nursery at Netherseal!

It was during a spell as locomotive foreman at Blackpool in 1899 that Mr Gresley met the lady who was later to become his wife, Miss Ethel Frances Fullagar. She lived a short way along the coast at St Anne's. The couple married in 1901 and set up house in Newton Heath, three miles from Manchester where two of their children, Nigel and Violet, were born.

The family moved to Doncaster in 1905 because Mr Gresley had been offered the senior post of Carriage and Wagon Superintendent of the Great Northern at the tender age of 29. Later, upon the retirement of Henry A. Ivatt from the post in 1911, further promotion followed, to that of Locomotive Superintendent.

During his time at Doncaster another son and daughter were born, Roger and Marjorie. The Gresleys were very devoted parents, always spending holidays with their four happy children each year, either at Braemar in Aberdeenshire or at Sheringham in Norfolk. The family lived in three locations in Doncaster and in recent times the Doncaster Corporation invited the townspeople to vote on a name for the large square which was now in front of the huge civic offices that they are building. The Doncaster residents overwhelmingly voted for the name "Sir Nigel Gresley Square".

One January, Mr Gresley went to stay with his mother, Joanna, at Turnditch near Belper in Derbyshire and he and his brother, who was visiting from Canada, went rook shooting. While climbing over a hedge of the common sloe, he got a thorn deep in his leg. His brother dug it out with his pipe knife but the wound very soon turned to poison. This septicaemia made him seriously ill for some weeks, being eventually cleaned by leeches sucking the poison out. The Gresleys convalesced in Bournemouth and for a long time Mr Gresley had a pad fixed inside the well of his desk in case he knocked his knee.

During the 1st World War he gave valuable service for the country when Doncaster works was largely engaged in making munitions for the war effort. He was made a Lieutenant Colonel in the Engineer and Railway Staff Corps. In appreciation of this war effort he was awarded the CBE in January 1920.

In 1911 upon the retirement of Mr Henry A. Ivatt from the post of Locomotive Engineer for the Great Northern, a post he had held since 1896 when he made it known to the G N Board that he intended to retire on his 60th birthday on 16th September 1911. There can be no doubt that he made his plans with the full knowledge that the succession was assured and that he would be followed as Locomotive Engineer by Nigel Gresley. The post was not advertised and Gresley assumed responsibility on 1st October 1911, Ivatt postponing his retirement until the end of the year to ease the changeover. Gresley was only 35 years old.

In 1929, Mrs Gresley had to undergo a serious operation at the family home. Afterwards, the surgeon told her husband that the illness was terminal, there was no hope of his wife's recovery. Mrs Gresley was never told, so for months Gresley had this great ordeal to endure. Ethel Frances Gresley died in August, being buried at Netherseal, her husband's boyhood home. She was only 54. Gresley was devastated and some say that he never really recovered. They enjoyed a very happy married life. His daughter Vi stepped into the role of the hostess and devoted companion and accompanied him on future business and social occasions.

The strain of that summer had aged Nigel Gresley considerably, so to recover from his great loss he went to Canada, accompanied by his daughter, where he hoped the high, bracing air of the Rocky Mountains would give him the tonic he needed.

On his return from Canada, Mr Gresley lived with his family in a flat in London for a year, but his love for the country was predominant. Eventually he moved to Salisbury Hall near St Albans, an Elizabethan residence surrounded by a moat. Here he could enjoy one of his favourite hobbies, that of keeping and collecting many species of British wild duck on the moat. After his eldest daughter married in 1937, he decided to leave Salisbury Hall and lived with the couple at Watton-at-Stone in Hertfordshire.

Mr Gresley was knighted in 1936 by King Edward VIII.

He received an Hon. Degree of Doctor of Science from the University of Manchester.

A further accolade was bestowed upon him when the Directors of the LNER proclaimed that the 100th Pacific Locomotive which was built to his design, A4 No 4498, was to be named after him. The ceremony was performed by William Whitelaw, Chairman of the LNER, at Marylebone Station on 26th November 1937 with many of Sir Nigel's team to witness the occasion.

His intense keenness and love of his work never slackened, in spite of his heart specialist warning him to ease off a good deal, in order to live long, in 1935. Early in 1941, he was again warned that he would not live for six months unless he cut down his work to only four days a week, but Sir Nigel said it was not possible, he could not be seen to slacken his work during a war, when everyone else was working to their best ability.

Since 1927 Sir Nigel had cherished hopes of a National Locomotive Testing Plant for the "attainment of increased efficiency." But those were hard economic times and government help was not forthcoming. He persevered however, enlisting the support of Sir William Stanier. Eventually the directors of the LMS and LNER agreed to pool their resources and gave the go-ahead in 1935 for a plant to be built at Rugby. The outbreak of war in 1939 brought construction to a halt.

Most unhappily Sir Nigel died on 5th April 1941 after a short illness, but his long-cherished dream did come true on 19th October 1948 when the plant was officially opened, with two of his family in attendance. The first locomotive to run onto the test rollers was A4 Pacific "Sir Nigel Gresley." Surely a most fitting tribute to a great railwayman.

He is buried at Netherseal next to his beloved wife.