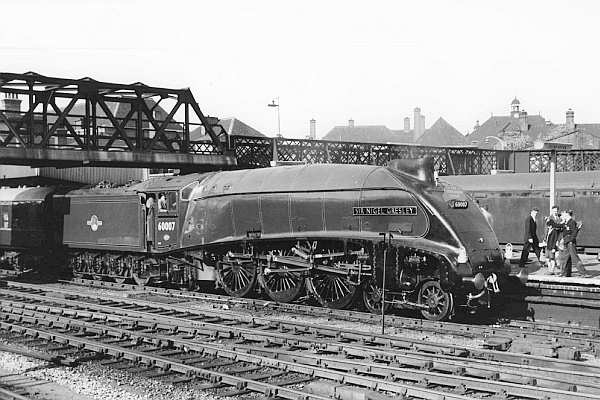 The 23rd May 2009 saw 60007 Sir Nigel Gresley running from York to London, 50 years to the day since more than 100 years of steam traction on the East Coast Mainline culminated in one last record-breaking run for the Gresley A4 Class. In 1959 steam still reigned supreme on East Coast expresses but diesel traction was already on the horizon and in this Indian summer some of the finest steam running of all time was produced. This is the story of the 'official' post war record for Steam Traction of 112 mph.

The story really starts in November 1955 with a run of the Tyne Tees Pullman; accounts vary a little but what is for sure is that a civil engineer with a Hallade Track recording instrument was on board a train when driver Bill Hoole took 60007 down Stoke Bank very fast indeed. Whether Hoole knew the man was on board is unclear but the technician clocked 117mph. This was well in excess of the official 90mph speed limit so the motive power department had to mount a staunch rearguard action to prevent serious disciplinary action. The Hallade instrument was not designed for recording such speeds and it was argued that the accuracy was insufficient to justify disciplinary action. In any case word of 117mph was allowed to reach Western Region ears who were at the time pushing 'King' class locomotives over 100 mph.

With the arrival of the first express diesels on the East Coast route in autumn 1958, it was clear that the days of the A4s as Top Link motive power were numbered so the idea of a farewell high-speed trip over the East Coast Main Line to coincide with the Golden Jubilee of the Stephenson Locomotive Society (SLS) found sympathetic ears at Great Northern House. The obvious choice of motive power and driver was 60007 Sir Nigel Gresley and Bill Hoole. Organisation started as early as November 1958, when No. 60007 was sent through the shops at Doncaster for a general overhaul. Much debate went on about the details of the trip, and in particular the speed that it would be allowed to reach. Achieving 100 mph on Stoke Bank was fairly common at the time so something slightly higher was hoped for. Eventually the Civil Engineer gave permission for the normal speed limits to be relaxed over certain sections but then it was realised that the 90mph was all the 'modern' diesels were likely to achieve for a number of years. A pre-war steam locomotive doing substantially higher speeds caused some concerns but persuasion from the SLS enabled this to be overcome and a maximum of 110mph was authorised down Stoke.

The 8-coach train left platform 5 at King's Cross without a slip on Saturday 23rd May 1959 using new open stock with a buffet car in the middle; every seat was taken. On the footplate with Bill Hoole were his fireman Alf Hancox, Chief Inspector Bert Dixon, Alan Pegler and Cyril Palmer, the Motive Power Officer of the G.N. Line. A public address system had been installed, with loudspeakers in each coach, and a microphone on the footplate. 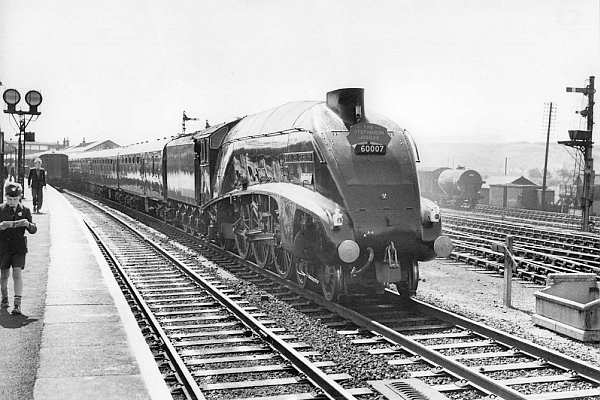 The climb to Potter's Bar was cleared with steam to spare at just over 60mph, at the time a blanket speed restriction of 60mph applied south of Potter's Bar. Hatfield was passed in 20 minutes 3 seconds and Woolmer Green just over five minutes later, before taking water at Stevenage troughs. The 90mph limit had been raised after Stevenage by 10mph for this special. Some recorders, including P.W.B Semmens, believed that the train did not quite achieve the full 100mph on this section although others, including the doyen of Railway correspondents Cecil J. Allen, claimed the 'ton', and speculated on a maximum of 101mph. Even Semmens agreed however it could have been achieved, but there was an error in the locomotive speedometer as for some distance the speed was announced as 100mph over the speakers. With the prospect of 110mph on the return journey, those on the footplate were left in no doubt about the speedometer's error when the train arrived at Doncaster! The 27.0 miles from Hitchin to Huntingdon took exactly 18¾ minutes.

A permanent way restriction followed the station restriction at Peterborough and some adverse signals meant it was not until after Werrington Junction that 60007 could really be opened up to produce an outstanding climb of Stoke. Speeds were 79mph at Tallington, 80 at Essendine, 83 between there and Little Bytham and a minimum of 80 just before Corby Glen. The train actually accelerated over the final stages of the bank to clear the top at 82mph, with the locomotive set to 40% cut-off and full regulator. The train stopped at Grantham station in 96 minutes 59 seconds for the 105.5 miles from 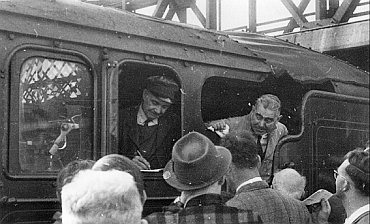 King's Cross. Passengers flooded out on to the platform to see the engine but the stop was just to pick up a pilotman for the road via Lincoln, so driver Hoole whistled hard and eased the locomotive slowly forward, which sent people scurrying back on board. The rest of the down run was uneventful but a tremendous reception was given to the train on arrival at Doncaster.

Departing Doncaster two minutes late it took just four miles to reach 70mph and after the 40 restriction over Bawtry Viaduct, touched 80 before a restriction at Retford. 80 was on the clock again through Dukeries Junction, after which speed was allowed to drop back. Beyond Newark was an unexpected hindrance caused by problems with the new continuously welded track, meaning speed had to be brought down to 28mph just at the foot of the long climb to Stoke. Without this it is likely that a slightly higher speed would have been achieved through Grantham than the 75mph to 80mph reported by different recorders. Accounts agree however that Stoke summit was passed at 75mph.

At this point P.W.B. Semmens wrote: "Excitement in the train was intense, and a wave of clicks from the massed stop-watches greeted the passage of each milepost, while those on the other side of the train were making their estimates of speed by furiously counting the number of rail joints in 40 seconds".

On the footplate Bill Hoole is understood to have turned to the officials present and said, "Are we going to do it? You've got two minutes to make up you minds." Speeds were 99 before Corby Glen, and 109 by Little Bytham with speed still rising steadily. Alf Hancox was doing well at keeping the boiler pressure well up and Bill Hoole intended to keep going hard until somebody stopped him. Alan Pegler, as a member of the Easter Region Board, had given assurances about the safety of the 400 passengers on the train and could not risk going much beyond the officially sanctioned limit and at 112mph he signalled to Bert Dixon, who Bill Hoole signs autographs at Doncaster, also on the footplate is Inspector Bert Dixon. Photo: Peter Coster tapped the driver on the shoulder as an indication to ease off; he in turn signalled across to the fireman, who packed up his firing efforts and the boiler pressure fell off quickly in consequence. 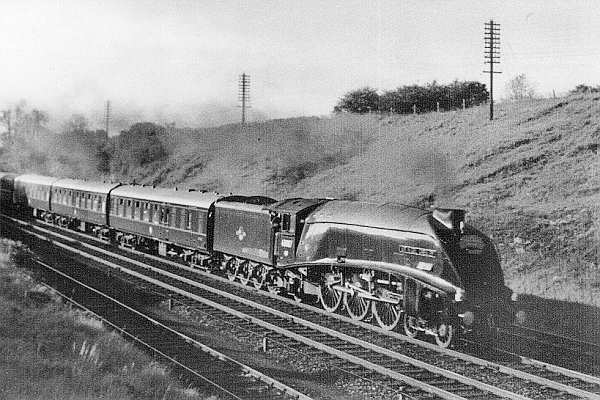 Nevertheless the post-war speed record had been set and the 12.3 miles from Corby Glen to Tallington were covered in only 7 minutes 6 seconds, an average of 104mph. Cecil J. Allen believed that to be the fastest ever time between those points at the time, faster than Silver Fox (7min 10 seconds) and Mallard. Obviously this has never been surpassed with steam traction.

Semmens added "after this the passengers on the train relaxed, and the buffet car became a convivial centre of discussion about the trip so far, and the suggestion was even made that we might as well throw our stop-watches away as we would never see the like again. It was as well that no one took this too literally, as beyond Offord we suddenly realised that speed was rapidly increasing once more, and there was a dash to the right-hand windows." From 90mph at Milepost 50, Bill steadily worked the speed up on the mile-and-a-half of 1 in 300 down, as the foot of which the train was doing 98mph. The acceleration continued until, just beyond Tempsford, 100mph was reached for the third time that day and this time on level track. This represented a magnificent effort by the locomotive, and Allen records that he was not aware of any parallel over this section of track. The rest of the trip was taken comparatively easily with the train rolling into King's Cross 4 minutes early in 137 minutes 38 seconds from Doncaster, an actual average of 68mph over 156.0 miles. Cecil J. Allen calculated that at least 25 miles of the day's running was completed at an average of 100mph.

In one very important respect however, Sir Nigel was far better than Mallard and Silver Fox, for that matter, which reached 113mph on the Silver Jubilee on 27th August 1936 – she completed the trip in perfect condition and was available for work the next day whereas the others both had hot middle ends. Indeed, within the next week Bill had her over the 100 mark again with Jack Boston on the footplate. The outstanding success of the Golden Jubilee Special was the tribute; steam power on the East Coast Route could not have had a more fitting grand finale.

World Record?
One question that will remain unanswered concerning the day was whether 60007 could have approached or even bettered Mallard's 126mph record. Semmens recorded that "Bill had carefully studied Duddington's world-breaking 1938 run with Mallard and had come to the conclusion that it would be possible to beat this with Sir Nigel Gresley given the impetus of a faster run through Grantham than the 70mph usually allowed." As Hoole and 60007 had already achieved something like 117mph down the bank with the usual 70 restriction through Grantham, and with the 80 permitted for the special train, he apparently reckoned that 117 + 10 = 127, i.e. one more than Mallard. It has to be said that this is a somewhat simplistic calculation as train rolling resistance does not increase linearly with speed so a direct relationship between impetus and final speed is not valid.

The redoubtable Cecil J. Allen records that speed was gradually increasing all the way to the point when 60007 was eased. He stated that cut-off was eased from the 30% because boiler pressure was down to 200psi and undoubtedly Semmens would have been aware of this when writing Bill's side of the story. Allen felt a maximum of 115mph was all that could have been achieved if Hoole had not been restrained.

Semmens records that Bill Hoole himself remained convinced that "with our technique and her abilities, Mallard's record would have gone by the board". Obviously we will never know!

In 1999 a special brochure was produced by the Sir Nigel Gresley Locomotive Preservation Trust to commemorate the 40th Anniversary.

A Fitting Tribute
C.J. Allen finishes his article by reminding readers that 18 years after the death of Sir Nigel Gresley it was still the case that for any 'State Occasion' or speed record attempt on the Great Northern a Gresley locomotive would be turned out "to do the honours". Allen concluded that "the A4 'pacifics', despite the overwork and neglected maintenance from which they suffered during the war and in the immediate post-war years, in all major respects still remain as Sir Nigel Gresley designed them and with little question represent the peak achievement of his career as a locomotive engineer". 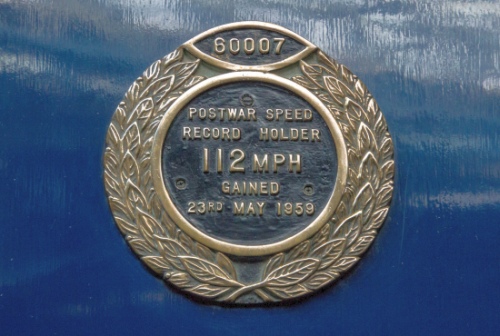 The plaque carried by 60007 to commemorate the event.
Photograph © Andrew Houghton